James O'Brien gave his reaction to the rapper's controversial lyrics which referenced the Manchester Arena bombing.
James shared a memory of interviewing Eminem 20 years ago on the advent him becoming a sensation in the UK and remarked that the controversy was "difficult for him to negotiate".
Eminem's lyrics are: "I’m contemplating yelling ‘Bombs away’ on the game/Like I’m outside of an Ariana Grande concert waiting."
"The terrorist attack at that Ariana Grande concert at the Manchester Arena shook us to our core," said James, "there was something so completely despicable about the idea of targeting happy children that it shook us in ways that even other terrorist atrocities haven't shaken us. Eminem has decided to reference this on his latest album."
After talking about this attack, Eminem compares himself to others including Saddam Hussein and James questions, "He's just doing what Eminem does, isn't he? What do you do if someone is deliberately trying to offend you for money or clicks?"
#JamesOBrien #Eminem #LBC
LBC is the home of live debate around news and current affairs. We let you join the conversation and hold politicians to account.
Subscribe for more: l-bc.co/subscribe
Watch More Here:
The Latest Brexit Videos: l-bc.co/BrexitLatest
The Best Of The Nigel Farage Show: l-bc.co/Nigel
The Best Of James O’Brien: l-bc.co/JamesObrien
The Best Of Iain Dale: l-bc.co/IainDale
The Latest Donald Trump Videos: l-bc.co/DonaldTrump
Join in the conversation and listen at www.lbc.co.uk/
Sign up to LBC’s weekly newsletter here: l-bc.co/newsletter
Like, follow and subscribe to LBC!
Website: lbc.co.uk
Facebook: fb.me/lbc
Twitter: Twitter.com/lbc
Instagram: instagram.com/lbc

Y'all wanted Slim Shady but weren't ready for him....

That line was something we missed a lot of Eminem. It's called shock value

being a victim from that night, i can’t possibly put my head around why he’d do it, it’s not easy living with it let alone one of your favourite artist writing it in a song... it hurt me and i’m sure i can speak on behalf of the other victims, it must of hurt them aswell. at the end of the day it should never be spoken about in anyway shape or form. end of.

yes i know he raised money for the event (which i respect) but that doesn’t give him permission to talk about it.

Imagine Eminem gets sued for this.

Eminem made a video song on Gun Violence Eminem raised 2million dollars for Manchester Victims But, Eminem mentioning the Manchester Bombings is a real issue👏👏

It's not a terror attack

Eminem faces backlash for his new album. Oh the nostalgia

I’m sure people want to forget about the bombings and sit there waiting for it to happen again. Eminem doesn’t.

It’s what he does

People seem to forget about the 2 million he donated. You mugs get over yourselves lol 🤣🤣🤣🤣🤣🤣🤣

what do you do? stop listening, that's it. he's an entertainer, I don't know how this is shocking :))

I know that he raised money and im happy for that but please man im from manchester and i lived here all my life, bit too far for me

LOL! These clowns don't mention he also help raise 2mill for that incident.

People just need to realize it’s just a metaphor and words he’s not actually doing the bombing or killing it’s that simple, there are people who say a lot worse than what eminem states and they really mean it and will do it!

Oh my Eminem was always supposed to be nice and gentle with his lyrics.

Facts he donated money didn't he

And for your information that's not eminem was shady 😂

1.3 k dislike the word you looking for

To speak the truth you have the right to be offensive

Its just bars get over it em has donated loads of money etc it’s not different to comedy...

what does fornite have to do with emsinem

One rule for the rich and one for the poor .

James your are the weakest link. Goodbye!

You should not give reviews. You are bad at expressing an opinion clearly and you should be bothered by it too. You are writing him off and you missed the whole point. I feel sorry for you.

Crybaby’s these days, Jesus help us

2 million pounds donated HELLO?? CAN YOU HEAR ME??

"Fairly big in america" is when I stopped watching

I used to like Eminem. Then I found out James O Brien usually likes him.

The only controversy is how the rest of the rap genre survives 2020 after Em completely slayed everyone in January.

Dont be a snowflake and you wont cry all the time

People complaining about Em referencing the Manchester attack need to remember that hip hop is political discourse first and foremost.

He also made jokes about 9:11 and comments about that in his album it's no different ones older ones more recent they both had people dying they were both horrific attacks it's meant to be nothing is off limits everything can be funny and I feel like he succeeded at that goal

You missed the point bro.

The whole album is based on the American tragedies that have happened over the past few years.... It’s making a point and Eminem is correct about it. 🤷‍♂️ It’s asking how much more has to happen, for everyone to take notice?

He also has lyrics about 9-11 and the Vegas shooting. I don’t get the outrage over this specific lyric.

Couldn't resist the jibe at Laurence Fox could he.

That's what you get when you hate on Eminem, x5 dislikes to likes😂

6.5 minutes of my life I can never get back.

He said worse about 9/11 and Americans didn't bat an eye. Grow some nuts UK.

Man some people are ignorant when Shady did a charity and raise money for those victims!

Typical over sensitive "Brit-wits". You will never "get with it" sometimes *facepalm*

Freedom Of Speech is awesome isn't it? No one cares about your feelings.

Hes made fun of Christopher Reeves being a paraplegic, sonny bono dying, gabby Gifford getting shot in the head....this is what he does. Why take offense now?

He’s famous for saying crazy stuff. Did everyone really get shocked when they heard it. I wasn’t. I was thinking the whole song was dope. He was going in.

Ohhhh I get it now because he’s famous he can say what he wants right?

Rap is awful. Obviously that is a subjective opinion

The whole album is fire! It's no way derogatory towards the families! He donated 2+ million for the fund!

obrien is such a tool

Clearly they don’t understand rap, he’s telling a story not saying he is supporting it... Eminem is so bad now though, his music is dirt. Nobody in the US even bothers to listen anymore. Most rap and heavy metal from the 90’s to early 00’s is basically a protest, Millennials and Gen X loved it. No control on the internet, MP3’s and MySpace uncorrupted made it spread across the globe and into young ppls tank PC’s. Dial that up for 6kbps on Napster then Kazaa and go to sleep with ur queue on lol, (unusable while downloading).

For Eminem, it's words that rhyme or fit together... That's all.

The song is about stopping gun violence and terrorism. The shock is needed to make people see his view. This is main song he is promoting with the album and the end screen essentially tell you to vote for gun control. Don’t be an idiot.

Biggie smalls did the same with his lyrics

I don’t see any problem he brings it up. These things get pushed under the rug a lot so if anything it’s getting people talking about it. Further pushing for justice like y’all keep calling for in these post.

Doing what eminem does

Listen to the whole album...hes not being disrespectful...hes talking about issues that need to be talked about..the entire album...well most of it is pretty deep and meaningful if u actually listen to it nd not get offended right away

As soon as I heard the album I knew this was coming. Here comes The Woke police

How much free time do you need to deliberate lyrics from an "outdated entertainer". Let's ask LBC. But fr a bloke breaking down bars is cute. Still gets a dislike.

You couldn't resemble a talking head more closely if you tried.

Best to ignore him

I saw this coming...this is what happens when u only hear what u want to hear

I am a Manc. I live in Manchester and I do not take offence to the lyrics. It's not malicious to the families. After all he raised $2m for the families! It's sad and very upsetting what happened but Eminem is making fun of it.

Everyone tripping about this. True Eminem fans will continue to support and respect him. Dude has donated so much money to mass shooting victims. Eminem offends people, what’s new?

Em, like everyone else, is bothered by all these tragedies... that's why he raps about them.

Who is this guy?

Its not em its slim shady

Imagine the only bar they can actually understand make them not want to listen to album.

"I'm not going to finish this for obvious reasons." That's right, because you're not serious about it unless you willing to look it in the face.

😂😂 I love all these soft people

"If I said I'll be in the news tomorrow, who would the odds favor?" Eminem's own words and point being made in a song about the vegas shooter. Eminem donated money to the Manchester attack, and is trying to raise awareness on school shooting, and the vegas shooter to try and make a difference, but then the media aims to demonize him. Smh

Eminem stands up to bullies and makes me not afraid to say what's on my mind. Thank you Em you are my hero.

He said WORDS... how pathetic of a person could you be to be HURT BY WORDS...

I'm not mad at you slim 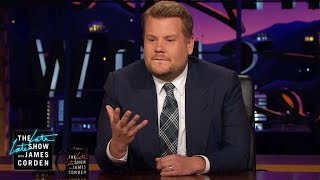 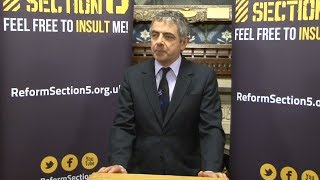 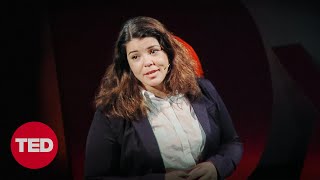 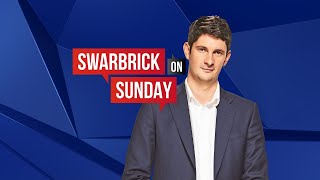 Swarbrick on Sunday | Watch live from 10am
Views 284 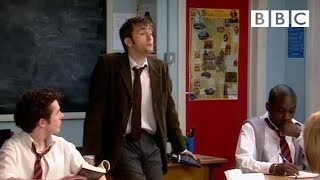 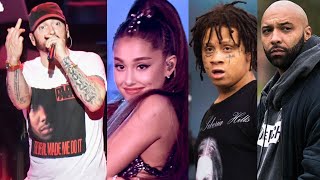 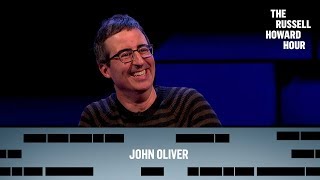 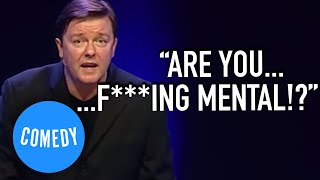 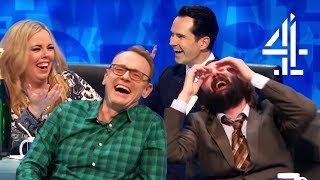 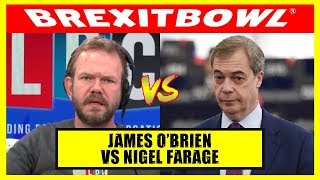